Every year over December, I run a program called Get Better in December. The idea is that, despite all the parties and feasts and hectic schedules, we the Fit Feels Good Bootcampers , will not only maintain our fitness levels, but get BETTER.

We compete both individually and as a team and the person with the most improvement gets to take home the coveted Fit Feels Good Trophy (that may or may not have been created by a some tipsy trainers with a glue gun at our Christmas staff party in 2014). 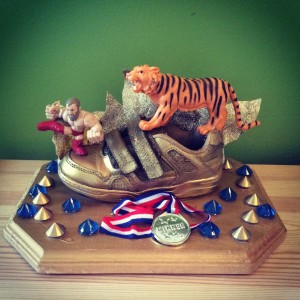 This is the original Trophy. Each recipient has taken it upon themselves to add to it. It now includes feathers, a dragon and at least 3 more medals.

Alex joined us last spring and this was his first ever Get Better in December. He missed the final assessment but asked if he could do it in the next class. “I’m a documentary film maker” he said, smiling. “The story needs an ending.”

So how’s this for a Hollywood wrap-up:

Holy. shit.
So I asked Alex if he would be our January Fitness Story. He said he would, but warned me that “the answers might not be what you are expecting”.
He was right.
I’m so honoured that he chose to share it.  This is Alex’s Fitness Story:

Were you always an exerciser? What did you do for your fitness before signing up with FFG?

I’ve always been pretty active. I played rugby from the age of 11 until I was 30, but eventually had to give it up because of a congenital heart condition. 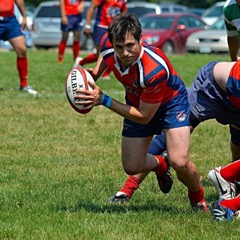 I had a valve replaced in 2008, and that put pay to anything competitive. I’ve been kinds toddling along since but nothing had really stuck until this.

I’d been at a bit of a loss trying to fill in the gap after rugby. I went back to it on a much more social level but even then found I couldn’t really keep up. I tried a couple of different things (gym, training apps etc) but nothing really stuck because they lacked the rush you get from playing sport.

Then in May 2015 my twin brother died from cancer. He had it for about a year, and was diagnosed terminal about six or seven months beforehand. It was a very rare, aggressive form of cancer and I guess comparatively speaking it took him quite quickly, but he was really sick for several months – he’d gone from a guy who was a rugby player not even a year earlier to barely able to walk. He was my best friend, and also a dick…  it was that kind of irreplaceable relationship. It’s a cliche, but it really did make me think very hard about what I wanted to do with the rest of my life.

One of the choices I made was basically to stop fucking about and commit to something fitness wise because I need to be around for a long as possible for my family, and with my heart condition it’s already a ticking clock.

It all sounds very dramatic I know, but it’s kinda true. When I started these classes, I found something that worked both physically and mentally – which is always the hard part – and that’s kinda where I’m at.

I think more than anything I’ve found something I can commit to and that I enjoy. I’ve no interest in being screamed at by a trainer (done plenty of that already thank you), but I do need something that challenges me and that I can push myself and feel competitive, even though it’s with myself.

Also being in a group environment feels really familiar, and everyone is really fun to be with… even though no-one understands my accent!  (Oonagh’s note: Alex is from Yorkshire, England, so he’s charmingly incomprehensible.)  It feels right for what I want to get out of exercise.

I work in documentary TV, which is pretty interesting a lot of the time. I feel fortunate that I do a job I enjoy.
Outside of that, I have a daughter who is four going on fourteen. We’re trying to get her into something that she enjoys outside of school. At the moment its cirque-ability, which is circus led gymnastics.
I also keep my hand in the rugby by doing a bit of coaching in the summers. When you’ve done something for over 20 years it’s hard to let go! Plus it’s nice to feel like you’re giving back a bit. 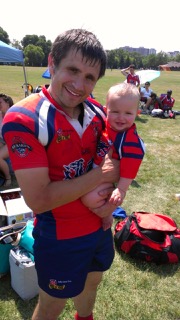 Oonagh’s note: I can’t even deal with how cute that baby is

I definitely feel fitter and healthier than I did six months ago, so if I can keep on the path I’m on now for the foreseeable future I’d be pretty happy. I’m a creature of habit. I eat well when I exercise and I exercise when I eat well. I guess the challenge will come when work starts to get really stressful, as I know it will do at some point, and will I stick to getting up in the morning having worked late nights… I feel like I’m in enough of a rythym that I will, and that wasn’t the case before I joined.

The knowledge that I will have got my fitness in before 7.30! I love that. I HATE that feeling of forcing yourself to go to the gym at the end of the day. It massively unproductive (for me anyway). I’m definitely a morning person. My wife loves that obviously… 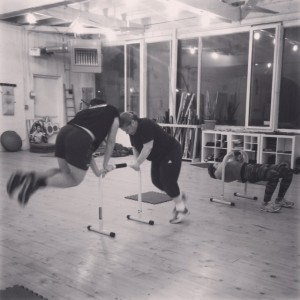 Alex in action at 6am. Not a morning person at all. (with workout partner Shauna and Maija killing it in the background)

One word – running. Mainly because I just can’t do it any more really. Suicides. Sprints. Even the warm up. It’s not that I truly hate it, but I hate my body for not being able to do it as well as I used to. But stick me on one spot and I’m happy as Larry. I don’t feel the effects as much doing pressups, burpees, squats etc… Go figure.

Actually there are a few. The obstacle course was great! I also loved New Year’s Eve techno/trance in the dark with finger lights. That was hilarious at first then suddenly it became exercise and you kinda forgot how funny it was. Then it went back to being funny again. It was a great idea! 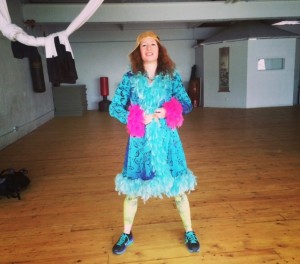 I’m not sure I’m the best person to dispense this kind of advice, as I do come from the Drill Sgt school of exercise.

But if it were anything I’d say take it at your own pace at first – I’ve given up on stuff because I went too hard too soon and then got fed up.

THEN, if you get into it and start to like it, you’ve got to start to bring something to the table and challenge yourself. I’ve been told many times that fitness itself should never get easier – the fitter you get, the more you have to put in to get something out. But it’s how you feel outside of the class that will tell you if you’re getting anything from it.

On a personal level, the 15 minute wall sit was pretty satisfying. I doubt very much I could beat it though… It was nice that we got the trophy too, not that I’m at all competitive… 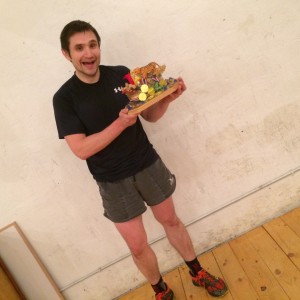