This is how funny Diane is: Not only did she clearly just crack up our PM Justin Trudeau and his wife Sophie in this pic (above) – when she sent it to me she captioned it,

“Sophie won’t be laughing the next time I get my hands on JT.”

And this photo isn’t just a gratuitous celebrity shot – It represents the catalyst moment for Diane’s Fitness Story.

It was taken at the Broadway premiere of Come From Away.

(In case you’ve been under a rock, Come From Away is a documentary musical about the planes grounded in Newfoundland on September 11th 2001.)

Diane was flown in from Gander to walk the red carpet for this premiere because one of the characters (Beulah Davis) is partially based on her.

Her fitness story started because she wanted to look good in a dress for that moment – but has turned into a lifestyle transformation against all odds.

Like, check it out –  you think you got fitness problems?

Diane described herself as a “52-year-old obese non-exerciser with degenerative discs and diabetes.”

She was also exhausted from sleep apnea – and a busy schedule that includes caring for multiple Syrian refugee families.

Never mind that getting fresh vegetables in Gander, Newfoundland is hard.

(And even if it weren’t – her husband Leo didn’t want to eat them.)

Seriously? Most people would say screw the fitness thing.

Read on to find out how Diane lost 30lbs, got her husband on board, adapts our healthy meals with limited fresh food and now finds herself exercising ‘by accident’.

This is Diane’s Fitness Story:

(In her own words) 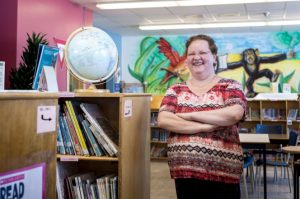 Diane in the kindergarten classroom she taught in for 30 years

Oonagh asked me to answer a few questions to help her write a blog post.

Personally, I think she’s trying to get out of work out.

Anyway, last October I was invited to a dinner and Toronto actress Astrid Van Wieren was sitting at my table.

We were seated together BECAUSE SHE PLAYS ME IN A MUSICAL!

They hadn’t mentioned it to me before. 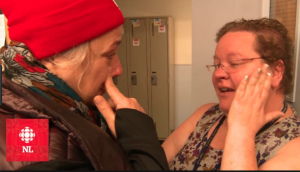 Diane meeting the actor that plays her in the show

We were quickly invited to Toronto for the Mirvish opening of Come From Away.

And I really hadn’t caught on to how big a deal it was until I was standing on a stage in front of a full standing ovation and a hell of a lot of cameras.

I did not anticipate walking on to a stage with a standing ovation.

I sure didn’t expect to be on the National News.

And I did not feel comfortable in my clothing or my appearance.

That whirlwind almost settled when we got an invitation to New York City to attend the Broadway opening and the shit got real.

The outline mentioned a cocktail party  – but the more formal event was the opening the next night.

As they say in Gander –  holeeey shit!

I was dress shopping online, praying for something that might hide a multitude of sins and make me free comfortable in NYC –

– when my sister Sandi shared another spam post about this crazy fitness plan stuff.

I hesitated about the cost of the program. And then looked at the price of the dresses in the online shopping cart.

I cancelled the shopping cart full of dresses and signed up for the program.

Then I broke the news to my husband Leo.

We started the challenge in January. Leo played along as long as he could have Catalina dressing on his salads.

(We also learned that if I shred the lettuce rather than leaving it leafy, we get more greens in and he likes it more. We now actually miss salads when we haven’t done one in a few days. Weird, eh?)

In the first 28 days we lost almost 10 lbs each. Without exercise! (I have a litany of excuses, just move on…)

While we were in NYC, we ate on plan by eating at Pret a Manger and at a Korean take out for many of our meals. 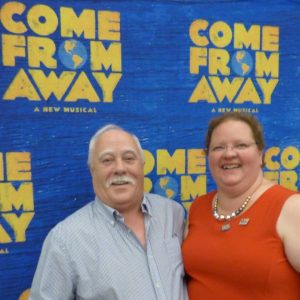 I left 2 pairs of pants and 3 tops in NYC because they didn’t fit or feel good any more due to being TOO BIG.

We’re 11 months in now and each have about 30 lbs each gone. It hasn’t always been easy but it certainly hasn’t been hard either.

I live in Gander, Newfoundland. Unless it’s carrot, turnip or cabbage, all of our produce comes here by truck.

The nearest (and only) Costco is a 4 hour drive –  and don’t even suggest a farmer’s market or buying “sprouts”.

Some of the food is more expensive (we pay $4 to $6 for a cauliflower and cut off the brown bits) but because we eat less of it, it works out the same.

We have a freezer full of cod that Leo caught and filleted so I will often sub fish for chicken in some dishes. It’s the asparagus at $6 for a tiny bundle that pisses me off. 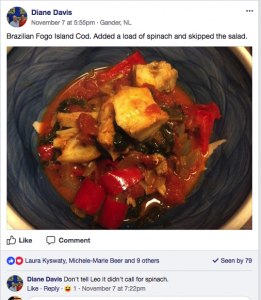 Living in rural Newfoundland is difficult and wonderful too. I wouldn’t give up my Fogo Island view for a Costco for sure. 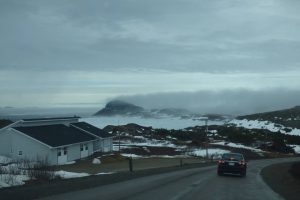 I’ve also learned that I like quinoa and we have some quick and easy go to recipes.

We both like curries and a proper Newfoundland pea soup is on plan.Even our cheat meals are not crazy because we enjoy the food we eat now.

Our last cheat night was to split a plate of nachos. A year ago, we would have had wings and fries on the side.

We both get lots of compliments and we both  feel much better with another 30 pounds gone.

And I don’t feel like I’m doing without. We eat really delicious food, just a lot less of it and we feel satisfied rather than stuffed and bloated.  We feel good.

I have less pain in my back, I’m not winded when I walk or climb stairs…

We have more energy and have found ourselves accidentally hiking trails when we go on holidays.

Where we might have sat at a picnic table and admired before, we are now climbing stairs and following trails around ponds and over hills.

After, Leo looks at me and says, “We wouldn’t have done that a year ago.” 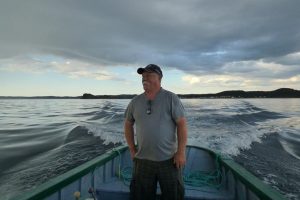 – chances are good I would be feeling unwell and medicating that with more food.

We were at Leo’s brother’s house and offered some soup. Leo told him we’d just ate.

Pat: What did you have?

Pat is still wondering what we ate…..

(Note from Oonagh: Do you love Diane as much as I do? Leave a comment below to congratulate her on all her fitness success! )