How To Not Hate Running

How To Not Hate Running

If Ben Kaplan and I went to the same high school, we probably would have bumped into each other trying to sneak cigarettes behind a portable. (He probably wouldn’t have talked to me, though – because he’s got much cooler taste in music.)

Now Ben and I both find ourselves in the surreal position of being all old and fitness-y. Ben is the General Manager of iRun magazine and the author of Feet Don’t Fail Me Now, The Rogue’s Guide to Running the Marathon.

In his book, Ben tells you a bit about his journey from a ‘degenerate barfly’ to a Boston Marathon runner  – and then provides you with a plan about how you make the transformation yourself; in exactly one year. 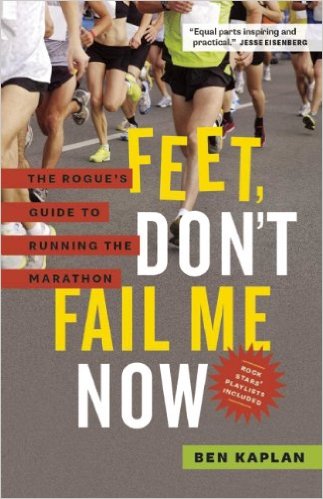 This is the man who got Rob Ford to go for a run. 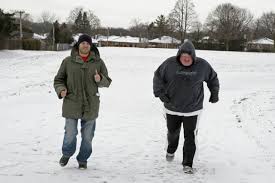 Imagine what he could do for you.

Ben also writes about music for the National Post and includes glimpses into the running lives of musicians. Apparently Alanis Morisette had to listen to ‘Survivor’ by Destiny’s Child on repeat when she ran the New York City Marathon. Slash from Guns and Roses really hates running but he watches TV and just gets it done. 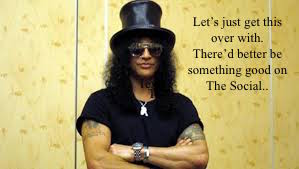 In reading Ben’s awesome interview below, it’s clear that Ben and I agree one thing:

Getting in shape doesn’t have to be so fucking SERIOUS.

So many people are out there  talking about form and progressions and intervals and that people are paralyzed and they end up doing nothing because they think they can do it wrong.

You can’t do it wrong. Just move.

In the intro to Ben’s book, he writes:

This is your book and it’s a rogue’s guide. Start wherever, read whatever, skip wherever, run however. It’s not a textbook, it’s an outline and a motivational screed. Use it any way you want…just don’t forget to lace up your shoes.

Ben and I also agree that it helps to have some sweet tunes.  So I’ve included a wicked running workout that coordinates the best Jock Rock anthems to an awesomeley effective and FUN mix of Low Intensity Steady State (LISS) and High Intensity Interval Training (HIIT). It’s appropriate for any level and you will feel so cocky and badass by the end. Click here to download

And then read on to find out what got Ben out of the bars and to the Boston marathon:

Were you always an exerciser? If not, how did you start?

I used to ditch cross country to smoke cigarettes in high school.

But, I started think about settling down. I got married. And eventually bought a house and you know what comes next: children.

It was time to make a change and that’s when the Born to Run book came out. I found it when I was looking for something and since I was writing for the National Post at the time, editor Ben Errett asked me to write about the book. I put myself in the story, started running, and have run ever since. That was six years ago.

You make an argument in your book, Feet Don’t Fail Me Now, that we humans are made to run. Tell us about that.

I really stole that from Born to Run but the point is: our necks, ankles, heels, Achilles tendons and cardiovascular systems are all distinctive and all built primarily for one purpose: running long distances.

Back in the day (the prehistoric day), we used to chase down our dinner for dinner because man ate meat before we had spears.

We ran animals into cardiac arrest.

You hear a lot about ‘runner’s high’ and ‘hitting the wall’. What has been the high of your running life and what was a wall you thought you would never get over?

The high was probably the Boston Marathon and it was the wall, too.

At that point, I was a running nut, obsessed with my running times. But in Boston, the year the before the bombings, it was super hot. I didn’t alter my race plan and quickly it became apparent I had no chance of reaching my goals. This can be devastating. But at that moment I made a decision: I wasn’t going to be ruled by my watch. So I cranked up Nothing As it Seems (live version) on my iPod:

and started running again, while playing an air guitar and the people on the sidelines went nuts.

We have the power to control the Wall and the Runner’s High — these aren’t things that arbitrarily happen to us. We all have agency.

How has being active changed your life?

What do you do when you are not running?

I want to break three hours at the Toronto Marathon.

What do you do to psych yourself up when you just REALLY DON’T FUCKING FEEL LIKE IT?

I know by now that a bad run is better than eating a box of Triscuits.

I feel better about myself when I fight, and don’t wallow. So even if I don’t want to go, generally once I turn the first corner onto College Street from my house, I can get into it. But a few jumping jacks and the live version of Anthems for a 17 Year Old Girl on YouTube get me out the door:

Besides, spring will be here soon and getting outside is a good way to suntan.

Sometimes I get stomach issues but I’ll leave that there.

And instead talk about an inspiring running moment – which was running with my mom when we did a 5K this past summer and she ran the single toughest gutsiest one legged refuse to give up race I’d ever been proud enough to have seen.

I have a picture of us running that race in a frame in my office (which is really our house basement surrounded by broken kid toys and crap; still, the picture is grand and my mom is the best).

What advice would you give someone who is just starting out with us or just thinking about it?

Have fun with it.

We all have plenty of grief in our lives. Things that suck. Things we can’t control.

Exercising, especially with someone upbeat and talented and positive and nurturing and kind like you (Oonagh)-  is a good thing. It’s stress relief. It makes you look good, feel good. Gives you something to do for yourself, that nobody can touch. It’s a selfish thing. A wonderful thing. And it can change your life.

Staying consistent for my wife and kids and being a decent human being when the chips are down.

I have my moments but all in all, I think I’ve found a decent way to live.

Don’t you wish you could go for a run with air-guitaring Ben and his awesome mum? If so, leave a comment below and congratulate Ben on all his had work!

(and don’t forget to download your super fun Rock n Roll run: Here it is. Rock you like a hurricane.

By continuing to browse the site you are agreeing to our use of cookies.
Go to Top